We have great news from our DiscoveryLand Camp community: SUP is going to be one of the most exciting activities in DLC this year! In the last two years it took the water sports world by storm, and its rapidly growing popularity spread through Toronto and Ontario. It’s up to you swim on it: you can sit, you can lie, you can kneel, you can stand – whatever you like.

SUP is a new outdoor sport that is turning kayaking on its head, except now you can sit, lie, kneel, or stand on your feet. SUP is an acronym that stands for “stand-up paddle-boarding” using a surf style board and a long paddle. In a way, you can think of it as a cross between surfing and canoeing with the best of both worlds. 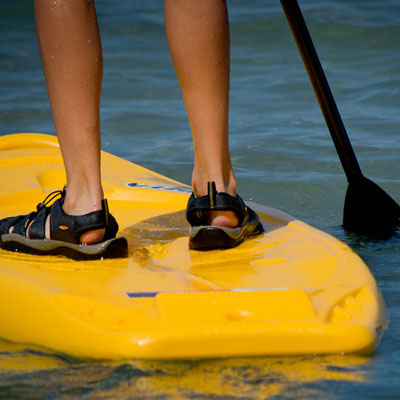 Where does SUP comes from?

Stand-up paddle-boarding has its roots from the place of practically all water board sports- Hawaii. Stand-up paddle-surfing existed since ancient times as Hoe hee nalu, but became more popular in modern times among surf instructors and photographers due to the view and the many different ways it can be surfed on.

This sport has massive appeal because anyone can do it. In the camp, it will be available for both Kids and Teens Clubs. That doesn’t mean other paddle sports are going anywhere! Kayaks and canoes remain better for long distance water treks. And each sport has its own challenges paddling a stand up board in the wind, as we will learn later in the summer, is definitely a challenge you want to try!

Play and Surf with Paddle Board!

Surfing! Yes, you can surf a SUP. You can catch smaller waves allowing you to practice more and under easier circumstances. That is perfect for places in Ontario like Huron Lake, where bigger waves are few and far between. When standing you can also see the sets rolling in much better (and farther out) than from sitting. Surfing on stand up board is going to be amazing!

We are big believers in the idea that your workout should be fun. You shouldn’t dread going outside and moving around – you should be super excited about it and counting down the seconds till you can try it! SUPing will give you that. A stand up board is relatively easy to handle and gets you amazing view and epic workout in a short time.
There is a reason that SUPing is considered the fastest growing water sport in the world. Try it in DiscoveryLand Camp this summer!
DLC: Summer Camp Toronto kids love